What Are You Reading? Children’s Book Picks for January 2013 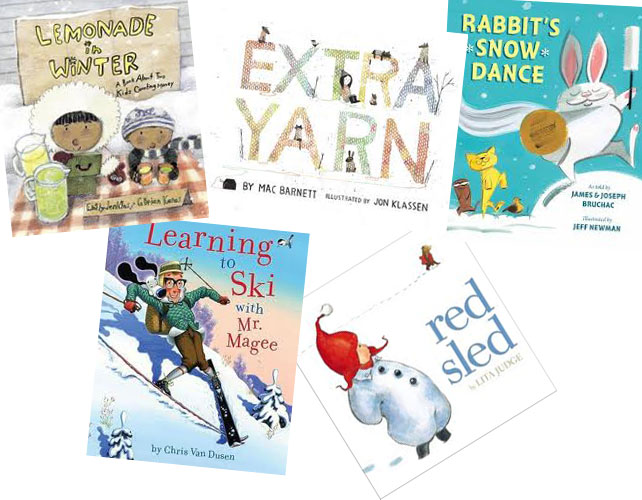 Sure, wintertime means cold and ice, short days and long, dark nights; but more importantly, it is a time of wonder and delight for children. There are so many thrilling winter activities—building snow forts and snow people, ice skating, skiing, sledding, playing hockey, making snow angels, drinking hot cocoa and catching snowflakes on your eyelashes and tongue. All of these activities make unforgettable childhood memories AND unforgettable subjects for winter themed picture books like the following:

Lemonade in Winter by Emily Jenkins
It may be a cold and snowy winter day, but Pauline and her little brother John-John want to set up a lemonade, limeade and lemon-limeade stand. Their parents warn them that no one will be outside in this weather, but Pauline and John-John are on a mission. First, they ransack the couch cushions and find 24 quarters. Then they head to the corner store for supplies. They buy everything they need and set up their stand….and, predictably, no one comes by. But do they give up…NO!  They gleefully try a number of strategies to attract customers including advertising, decorations, entertainment and even a discount. Several neighbors make purchases and at last, their pitchers of ade are empty. They eagerly total their earnings and Pauline is a little sad when she realizes that they spent more than they made! John-John helps her find the bright side to this financial loss, and the story happily ends with her simple yet spot-on explanation to him of American currency and the value of coins.
I find this book to be very satisfying on multiple levels. The story is upbeat, positive and creative.  It is both educational and hugely entertaining at the same time. The illustrations are instructive (especially when the children are the stand accoutrements) AND expressive (you really get the sense that Pauline and John are having the time of their lives as they happily bellow out their lemonade song and attempt to lure in customers with cartwheels, cheerleader pompoms and much more). It is a perfect read on a cold, snowy day when your own children are getting cabin fever!

Extra Yarn by Mac Barnett
There is nothing more comforting to me than being wrapped in the wooly warmth of a big, winter sweater. If you disagree, this classical fairytale-like story may change your mind! The heroine, Annabelle, lives in a cold, drab, black and white town where everything is covered with snow and soot. One day, she finds a box of colorful yarn and knits herself a sweater. Next, she knits one for her dog. She then goes on to knit sweaters for her classmates and other people in town. She makes them for various forest animals and even for inanimate objects that don’t usually wear sweaters, like mailboxes and cars. Even after everyone and everything is wearing a sweater, Annabelle has more colorful yarn left over. One day, a rich and powerful archduke offers Annabelle millions of dollars for her box of yarn. When she refuses to give up her box for any amount of money, he hires robbers to steal it from her.  They bring the archduke the box. He finds it is empty and angrily tosses it in the ocean, which eventually brings it back to Annabelle. This story has all of the ingredients for a good book. It has a magical aspect tied to it, as well as portrays the difference between good and bad characters and teaches that money won’t buy you everything. Most of all, it quietly celebrates a child’s ingenuity and her ability to change the world around her.

Rabbit’s Snow Dance by James & Joseph Bruchac
In this modern adaptation of a traditional Native American fable, children learn the reason why rabbits have short stubby tails. They also learn about the value of patience and friendship and what can happen when you get too much of a good thing. Not to worry though, they will be so engaged in the colorful illustrations and catchy chant in this picture book that they won’t even realize they are learning.   The story opens with an introduction to a Rabbit with a very long, squirrel-like tail who loves winter and snow. This Rabbit knows a special song and dance, done with a traditional Iroquois drum, to make it snow–even in summertime! The other animals of the forest don’t want early snow, but Rabbit doesn’t listen to them. Soon, snow begins to fall and the smallest animals are covered over their heads, but Rabbit doesn’t realize they are in trouble. Instead, he keeps singing and dancing and more and more snow falls until it reaches all the way to the top of the tallest tree. Rabbit is so happy with all of the snow, he doesn’t notice that his animal friends have all had to run and find shelter. He plays hard and then decides to take a nap on a tall tree branch. When he wakes up he is so excited about hopping in the snow on his big snowshoe feet that he steps off the branch without looking, and doesn’t notice that while he was asleep, the summer sun melted all the snow. He falls to the ground leaving pieces of his tail on the tree’s other branches, creating the first pussy willows and the first short-tailed rabbits as he falls.
For extra fun, try reading this book and then having your kids do their own snow dance.  Especially if they have been looking forward to a snow day and old man winter has not yet cooperated!

Learning to Ski with Mr. Magee by Chris Van Dusen
In this 2010 picture book, Mr. Magee and his dog Dee set off one morning to learn how to ski. They decide to take a solo practice run on a neighborhood slope before heading to the mountain for formal lessons. Their innocent plan quickly takes a wrong turn when they unexpectedly encounter a Moose: “With a snort the moose leapt! The skis went SPRING! They popped in the air with a ZIP and a ZING! And up like a rocket shot DEE and MACGEE…”  You’ll have to read the book to discover how the pair finds their way out of this predicament.
The wonderful thing about Chris Van Dusen’s books is that both the text and artwork can stand alone to tell an entertaining story. His rhyming text is witty and fun. It reminds you of Dr. Seuss and makes you want to laugh out loud. His pictures are bright and full of expression, adding to the humor of the stories they illuminate. I assure you; you won’t be disappointed with this read!

Red Sled by Lita Judge
This almost wordless picture book is destined to become a wintertime favorite. The story is a simple one: A bear finds a boy’s sled outside the boy’s home and decides to take his animal friends for a night time joy ride. The book’s bold, watercolor artwork and the sparse, carefully chosen words that accompany it are pure magic. They manage to convey the story really, really well.
“Gadung Gadung Gadung Gadung” appear on a page spread that shows a moose sitting on a bouncing sled with a rabbit between his front hooves and a bear with his mouth wide open lying askew on the moose’s antlers. Whether you say these words out loud, or just read them, you can “feel” the thrill of going down a hill on an overcrowded sled, bumping your bottom and jarring your torso and teeth.

Similarly when you read the words “eeeeeeeeeee…fluoomp…ft” and then see the accompanying illustration showing that the bear (with the rabbit perched on his head) has belly-flopped on top of the opossum and two raccoons (who have since joined the earlier animals) and the moose has been thrown off the page of the book with a porcupine hanging one-handed onto one of his antlers, you know you have experienced firsthand the animal sledders flying off the sled and crashing into the snow. Having had their fun for the night, all the animals watch from afar as the bear quietly returns the red sled to where he found it outside the boy’s house, “Scrinch scrunch scrinch scrunch scrinch scrunch,” leaving his big paw prints in the snow. If you and your family enjoy Michael Rosen’s “We’re Going on a Bear Hunt,” you will all love this wintertime bear story too!