Gymtime Gymnastics Growing by Leaps, Bounds and Back Handsprings 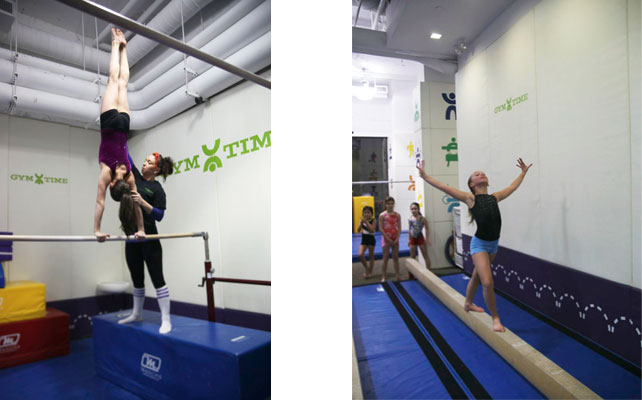 It’s hard to believe that in just four short years, the Gymtime competitive gymnastics team has grown an astounding 800%! Not only did the team, including pre-team, go from eight gymnasts to its current roster of 75, the Gymtime facility nearly doubled in size with the addition of the second floor. The new floor is dedicated entirely to gymnastics, housing four event training sections – bars, beam, vault and floor – as well as areas for conditioning and stretching.

While there are a number of gymnastic teams based in New York City, Gymtime stands out not just for what the team’s accomplished, but also for what sets it apart. “We have achieved winning first-place team awards and first-place, all-around individual awards. But what’s close to my heart is that we have also accomplished the creation of a family of girls who truly love each other!” notes Team Director Haley Blair.

If you’ve ever watched the girls at practice or during a meet, then you understand what Haley’s talking about. While the gymnasts individually strive to achieve and perfect their skills, they also show incredible support for one another, cheering on teammates, always ready with a high-five or a hug. There’s a genuine team spirit. And that’s no accident. “I believe how we treat our gymnasts is what makes us unique,” Haley notes.

Gymtime’s Gymnastics and Sports Director Chris Vollaro also has a special appreciation for the sense of family Gymtime fosters. He says he “practically grew up” at the Brooklyn Gymnastics Center, which was started in 1978 by Gymtime Co-Founders Michael and Bonni Branciforte. He began taking gymnastics classes there when he was six –years-old and competed for seven years on the gym’s team, becoming one of New York’s highest-rated gymnasts. “After my gymnastics career ended, I was never quite able to leave the sport or the school. He began coaching at BGC at 16 and eventually borough-hopped to Gymtime in 1994.

Chris says most of his staff members have a background in competitive gymnastics and educational movement, and he hires coaches who are committed to developing a well-rounded athlete. “I look for coaches who care about their responsibilities, which are not only to teach the sport but also to teach respect, responsibility, loyalty and not to be afraid to fail.”

“Gymtime’s Team was founded on the philosophy that the gymnast is treated with respect, cared for and feels safe in this environment,” adds Haley. “We want each gymnast to always try her best, work hard, strive for excellence, desire to progress and learn self- discipline.”

So what’s next for Gymtime gymnastics?

Chris readily answers, “To continue to grow as a school and to continue to pass along our passion and love for the sport.”