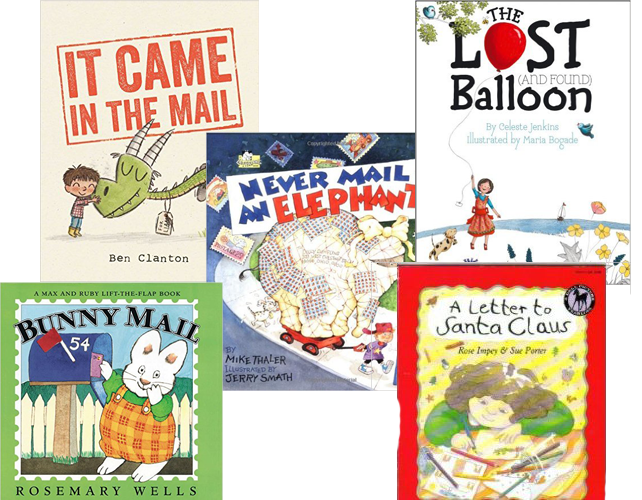 Call me old-fashioned, but I love stationary. I still send letters, postcards and thank you notes by snail mail and I religiously check my mailbox each day hoping for a bit of personal correspondence tucked in with all the bills, catalogs and offers of new credit cards. I have just finished stuffing envelopes and sticking stamps on 200 holiday cards for family and friends and I am excited to receive one or two in return.  In light of this, I have selected some fun postal picture books (including a Santa-related seasonal one) to share with you and your children.

It Came in the Mail by Ben Clanton
This gem of a picture book tells the story of a young boy named Liam, who really wants to receive mail, but never gets any. One day he has a brilliant idea to write a letter to his mailbox asking for mail. In response, his mailbox sends him a dragon named Sizzlefritz. Liam is thrilled with this, so he keeps asking for more mail.

The more he asks, the more cool mail he receives. After a while, Liam realizes he has too much. He decides he wants to share what he has received with his friends who don’t get any mail and he generously spreads his wealth around. I love the illustrations in this book as much as the story. The postcard look and the postal stampings are a fantastic touch. I think what I love most about this book, however, is its affirmation of my own belief in the importance of the lost art of letter writing I will happily send this book home with my students every chance I get.

Never Mail an Elephant by Mike Thaler
Never Mail an Elephant is a story about a little boy decides that he wants to send his cousin an elephant for his birthday. He gets paper, string and tape and buys lots of stamps. Then he gets an elephant from the zoo. He wraps the elephant up, addresses it, puts it in his wagon and takes him down to the mailbox. With a little luck and a lot of elbow grease, he stuffs the elephant package in the mailbox. With equal effort, the mailman pulls it out again and takes it down to the post office.

At this point, the elephant has had enough. He goes wild and runs away. Don’t despair though, the determined little boy comes up with a clever alternative way to deliver his present anyway. Your preschoolers will love this silly story, particularly if you pair it with a special trip to your neighborhood post office or a walk down to your building mailroom.

Bunny Mail by Rosemary Wells
Grandma is one of my favorite characters in the “Max & Ruby” books by Rosemary Wells. She is patient, generous, and very hip and she reminds me of my own grandmother. This is one of the reasons I love reading Bunny Mail again and again. Another reason is the clever lift-the-flap correspondence within the pages. In the beginning of the book, we learn that Ruby is sending out party invitations and that Max has decided he’ll write a letter too. In his letter, he asks for a special present. The postman delivers Max’s letter to Grandma. She thinks Max is just saying hello and she responds accordingly. Max tries again. Since Grandma knows her Max, she realizes something is up. She sends another response. More letters go back and forth and Grandma finally solves the mystery and satisfies Max in ways that only a grandmother can. I recommend this book for pure enjoyment and interactive fun.

The Lost (and Found) Balloon by Celeste Jenkins
If you have ever put a message in a bottle and sent it floating into the ocean or have filled and buried a time capsule, you will love The Lost (and Found) Balloon. It is a beautiful and fun book for young children (especially those who have recently moved to a new neighborhood, or whose friend recently moved away). In it, a girl named Molly ties a letter to a balloon and releases it in the hopes that the person who finds it will become her new friend. She carefully crafts the letter with details about herself and personal questions for the finder. At the end of the letter she includes her home address so the finder can respond. Molly sends the balloon off and it floats and glides through the book until it lands in the hands of another little girl. The location of the girl is a delightful surprise that is sure to bring a smile to your face. The poetry of the story’s text and the simple, yet, beautiful illustrations throughout the book will also make you very glad you chose to read it.

A Letter to Santa Claus by Rose Impey
A Letter to Santa Claus is an adorable Christmas story thatwill  make any child happy and eager for Christmas. Charlotte, the main character in the story, has beautiful handwriting and loves to write. She copies words, phrases and lists. Unfortunately, though, she doesn’t know how to read yet and this disadvantage catches up with her when she tries to mail Santa Claus her Christmas wishlist. After she writes the wishlist, she accidently mixes it up with the grocery list her mother let her copy earlier, and the grocery list is what Charlotte ends up putting in the envelope she sends to Santa. On Christmas Eve, it starts snowing. Charlotte is excited to see if Santa will bring her anything from her wishlist, but she is also worried about the animals she sees outside in the snow. She eventually falls asleep and then wakes up on Christmas morning to find that Santa has left her the food from the grocery list in her stocking. Instead of being confused and disappointed, Charlotte is happy that she can now feed her animal friends. A lovely ending with a strong message about kindness and sharing and the true meaning of the Christmas season.