Stories to be Thankful for: November Book Picks 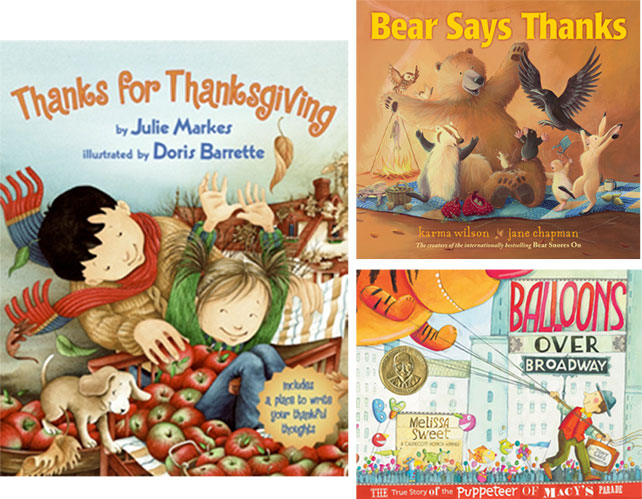 “Balloons Over Broadway” by Melissa Sweet
Millions of people around the world watch New York City’s Macy’s Parade each year.  While the floats, musical performances and precision marchers are all wonderful, I dare say that it is the giant balloons that most of these viewers tune in to see. You can re-live the excitement of watching those giant wonders over and over again whenever you read this engaging non-fiction picture book by Melissa Sweet. In the book, Ms. Sweet tells the inspirational story of Tony Sarg, the puppeteer who invented the balloons. She does so through an interesting combination of biographical information, historical fiction and beautiful illustrations which have an almost scrapbook-y feel that truly capture the spirit of Mr. Sarg. As a boy, Tony was determined to figure out how to make things move.  When his father asked him to feed the chickens very early every morning, Tony wondered if there might be a way for him to feed them without getting out of bed. He spread feed outside the coop, and then, with pulleys and ropes, rigged up a way to open the chicken coop door from his bedroom. When the alarm rang, he pulled the rope that opened the door. The chickens came out and ate their breakfast, and Tony went back to sleep! When Tony grew up, he became a puppeteer. In London and then New York City, he made marionettes and performed shows for children. He was hired by Macy’s to decorate their holiday windows with his marionettes. Tony created mechanical marionettes that acted out nursery rhymes. The windows were so successful, Macy’s asked him to help them create puppets for a parade they were planning, which he did.  As the years passed, the crowds watching the parade grow and grow. So did Tony’s puppets. Finally, he undertook to devise a puppet that would be big enough for everyone in the large crowd to see. His balloon solution was clever, simple and magical. It worked wonderfully then, and still does today.

“Bear Says Thanks” by Karma Wilson
We have loved Karma Wilson‘s Bear books in our house ever since my daughter received the board book version of Bear Snores On for her first birthday. I am particularly drawn to the friendly warmth of the Bear tales which is perfectly captured both by Wilson’s choice of rhythmic and repetitious words and by her wonderfully detailed illustrations that make me want to wrap my arms around Bear and give him a huge hug. This trademark warmth is once again present in Bear Says Thanks.

In the book, Bear wants to share a big feast with his friends, but when he looks through his cupboard, it is bare! His friends arrive one by one at his lair bringing with them delicious foods. Badger brings fresh fish he has just caught at the old fishin’ hole. Owl, Raven and Wren flutter in with “pears from the tree and herbs to brew tea.” Bear politely thanks each friend for their contribution, but also frets, because he has nothing to share with them in return. His friends assure him that he has plenty of other things to offer besides food. Most especially–his stories. This story is a natural read-aloud choice around Thanksgiving, but it also is sure to be loved the whole year through.

“Thanks for Thanksgiving” by Julie Markes
Thanks for Thanksgiving by Julie Markes is exactly the sort of Thanksgiving book I have been looking to add to the YAP library’s collection of holiday books. The story features a contemporary family, yet has a timeless quality too. Unlike many children’s Thanksgiving books, it doesn’t mention Pilgrams, Indians, The Mayflower or Plymouth Rock. Instead, it equates Thanksgiving with showing appreciation for the big and small things that occur in one’s life. Better yet, it uses everyday situations that children can readily identify with to demonstrate this concept, including hopscotch, piggyback rides, turkey, pie, falling leaves, school, music, dancing, art, play dates, swings, slides, games, puppies, cats, clothes, umbrellas, rain boots, puddles, parents, good night kisses, the moon, stars, and, most of all, family. Markes very effectively uses fun rhyming sentences and action-packed illustrations to keep her young audience intrigued and involved in this Thanksgiving story, successfully paving the way for families with young children to establish early on a tradition of sharing with each other what they are most thankful for. Good books like this one certainly are on my list.

Discover and tagged Balloons over Broadway, Bear Says Thanks, Reading List, Thanks for Thanksgiving, Thanksgiving