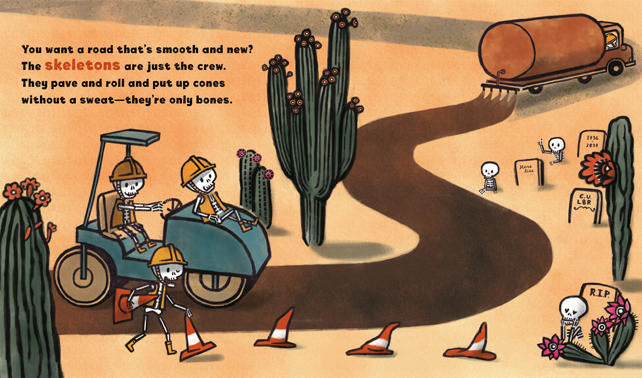 This month, I am excited to showcase four picture book “new releases” that are just perfect for a Fall Festival or Halloween Party story hours. All are by top-notch authors and illustrators who are adept at making their audiences fully experience the thrills and chills of Autumn.

In the Middle of Fall by Kevin Henkes Kevin Henkes and his wife, illustrator Laura Dronzek, have produced another great book that shows the changing of the seasons. Just as they did in last year’s When Spring Comes, Henkes and Dronzek have combined sparse, simple, lyrical text and soft, colorful illustrations to make a beautiful and impressive book. Unlike many Autumn tales, In the Middle of Fall takes place late in the season, with the leaves at peak color, the sky gray and gardens brown. “Everything is yellow, red, orange.” “Everything is chilly, frisky, gusty.” “Everything is changing, turning.” “Can you see it?” “Can you taste it?” “Can you smell it?” I am sure the answer will be a resounding “yes” especially as you read Henkes’ description of apple orchards – “the apples are like ornaments” – and see Dronzek’s spread with colorful leaves swirling around the page.

Interestingly, I once heard Kevin Henkes speak at a book conference where he declared that children’s picture books are a special art form that cannot be captured by electronic readers. He went on to explain that the size and shape and even the dust jackets of kids’ books are carefully planned to complement the text and illustrations of those books, and that these things cannot be replicated in an e-book. I have always believed this too. If you have any doubt, check out the end papers of In the Middle of Fall. They are perfectly coordinated with the story in the book showing fall leaves on the front ones and winter snowflakes on the back. Awesome!

Sam, the Most Scaredy-cat Kid in the Whole World by Mo Willems The newest Mo Willems book is a fun companion to his Leonardo the Terrible Monster. I do think that it helps to have read Leonardo before this book (so you can fully appreciate the throwback reference to tuna salad, for example). However, you will still enjoy this book just as much even if you haven’t read its prequel. Because essentially it is a sweet and simple story about fear and friendship with Leonardo leading the way. Sam is a little boy who is afraid of everything except for his monster friend Leonardo. One day, Sam and Leonardo meet Kerry and Frankenthaler, who is a girl and monster duo. “AAAAH!” yells Sam. “EEEEK!” yells Kerry. Both children are scared. Not of the monsters, but of each other! The helpful monsters try to get their friends to calm down and talk. Sam and Kerry just keep screaming. So, the two monsters decide to go get coffee and let the humans figure things out on their own. When Sam and Kerry finally stop screeching and start to get to know each other, they discover that they have lots in common including, best of all, giggling and trying to scare their monsters. Willems uses minimal text and colorful but plain backgrounds in this book. This allows readers to focus on the humorous body language and facial expressions of the four main characters. My library students absolutely love the characters, and they laughed just as loudly as they do whenever I read Willems’ Elephant & Piggie or Pigeon stories to them. Kudos go out again to Mr. Willems for helping kids face their fears with literature and laughter. With glow in the dark underwear, hide-and-seek antics and an ending as sweet and quirky as can be, this follow-up to Aaron Reynolds’ award-winning Creepy Carrots is sure to make his young fans gape and giggle. Despite the look of its front cover, the book is actually slightly sillier, and less creepy than Creepy Carrots. In it, Jasper the bunny offers just the right amount of cool, courage, cleverness and, yes, cuteness to keep the youngest listeners from getting too uncomfortable. Jasper is a bigger bunny now than he was in Creepy Carrots. He is thrilled when his mom allows him to buy a pair of the best underwear in the world–creepy, glow in the dark green ones. When he puts the underwear on at bedtime however, he is a little spooked by the ghoulish light they throw off. So, he tries to get rid of them which is easier said than done because the creepy undies are extremely persistent. This turns out to be a good thing in the end, as we see in the last few pages of the book. Those pages do a great job of bringing the spookiness back down and switching it over into a somewhat silly, but also, in its own way, heart-warming end. The illustrations do a terrific job in getting the feeling of the story across loud and clear. The emotions are easy to read in Jasper’s (and the underwear’s) expressions which makes this a picture book kids can skim through all on their own too. All monsters love the autumn air,
just right to sneak and spook and scare.
But other seasons of the year,
they shift into a different gear.

Any fear of monsters will dissolve as readers follow vampires, werewolves, skeletons, mummies, witches and other popular monsters as they use different trucks to do jobs about town. Each truck and monster team work on a job that perfectly matches the monster’s persona and temperament. A Yeti plows the snow, a mummy drives an ambulance and a witch operates a street sweeper. Joy Keller’s rich, rhyming text is very fun to read aloud. It does include some nuances and occasional jokes and puns that may need a little explanation to toddlers (but not much!). The illustrations are engaging and the story will hold up to many readings.