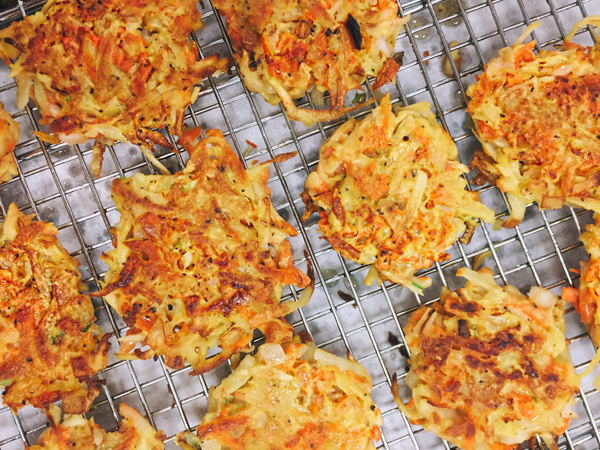 Root vegetable latkes are a delicious way to get your kids to eat vegetables that they otherwise wouldn’t touch! This recipe is a favorite among kids and parents alike!

2. Peel and coarsely shred the root vegetables, potato, and onion in a food processor fitted with the shredding disc (or grate by hand if you don’t have a food processor). Wrap veggies in a clean towel and wring out as much water as you can (this helps to make the latkes crispier). Transfer the vegetables to a small bowl. Add the egg, flour, 1/2 teaspoon salt, and 1/4 teaspoon pepper and toss well.

2. Heat 2 tablespoons vegetable oil in a large skillet over medium heat. Use a 1/4-cup measure to drop mounds of the vegetable mixture into the skillet and to flatten than to 4-inch rounds.

3. Cook until the bottoms are golden brown, about 5 minutes. Turn and brown the other sides, 4 to 5 minutes.

4. Transfer the latkes to a rimmed baking sheet and keep warm in the oven. Repeat, adding vegetable oil as needed, until all the vegetable mixture has been cooked.

5. Sprinkle the latkes with salt and pepper to taste and serve them with sour cream mixed with the chopped chives.